It has been no secret that I’ve struggled this year to get motivated and have been feeling lethargic with all the hectic events going on in our personal life, but I’ve done the best that I can to be resourceful and strategic in how I’m going to accomplish my largest race season yet. With 5 races down and 7 more to go, the preparation for The Skechers Performance Multisport Canada Toronto Island Triathlon/Duathlon P/B Martin’s Apple Chips, would be no different. I’d be racing the usual Sprint Duathlon consisting of a 5.5 km run/ 19.1 km bike/ 2.7 km run, with the goal of beating my time from last year. Mentally I was up for the task, but I knew my endurance was far from where it was last year at this time.

Sam and I had made a last minute decision to make the trip up to Toronto, Saturday night and stay at a hotel, eliminating the stress of a 3am wake up to drive 2 hours away for a race, which has been a struggle for us in the past. It was a much needed change and after a nice dinner we hit the hay, feeling relaxed that it would only be a 26 minute drive to the ferry terminal in the Morning.

We arrived to the Weston Harbour Castle at 5:45am. The volunteers were all hard at work, making sure we had everything we needed before the journey to the island. All of the athletes were making their way through bib/race kit pickup, body marking and assembling in the ferry terminal, awaiting our trip on the ferry. We were fortunate enough to be able to take the vehicle ferry over this time around, giving you a great open air experience of the harbour front trip. As I stood next to fellow Skechers Performance athlete Mikael Staer Nathan and MSC founder John Salt ( my favourite face to see on the morning of a race) I could not help but notice how relaxed I felt. This was a nice change in pace and I didn’t know it yet, but it would be just what I needed to hit my goal for the day.

As we arrived to the race site, athletes were busy setting up their transition areas and after getting myself situated (bike, helmet, cycling shoes, water bottle mixed with F2C Electro-durance) I placed my transition bag along the perimeter, out of the way of the action that was about to unfold. I headed over to the vendor/spectator area and made myself available as a MSC Ambassador for anyone who needed help or had questions about their race. It was great to see all of the familiar faces and get a chance to meet a whole bunch of new athletes who had stepped up to take on the unique bike and run courses of Toronto Island. If your looking for a technical race, both physically and mentally then this it. The bike course consists of two out and back laps of the Island on a service road full of bends, narrow chutes, a wide sweeping turnaround to the east, a sharp turnaround to the west and plenty of small road obstacles to keep you mentally engaged and test your bike handling skills. The run course consists of a 750m run out onto the 1km lap circuit, that even has an individual athlete, lap counter timing mat with flatscreen monitor, that shows your information as you pass, saving you from running fewer, or more than you are supposed to. It was a fantastic addition to this year’s race and had saved a few athletes that I know of, from botching their own results throughout the morning. After your final lap, you will head back through the 750m chute towards the finish line. These courses are excellent for tracking your competition and personally, I find myself pushing harder than normal, even if I’ve started the race with a plan to execute.

About 15 minutes to race start, we gathered in the Duathlon start/finish line for the wave mass start, where I found myself in the first group with fellow Skechers Performance athlete, MSC ambassador and always inspirational rocket man, Daryl Flacks and one half of the cyclist extraordinaire Schindler brothers, Peter. The horn blew and we took off through the arch. I kept as close to my desired pace as possible, but fellow Duathlete, Eric Laxton had been pushing me on the runs all season so far. I purposely removed the heart rate function off of my garmin watch after my last race, knowing mentally it had been suppressing my efforts, as I get older and a lot more cautious lol. It turned out to be a fantastic decision, as I pulled off my fastest 5km run to date of 20:18! I came into T1 in 23rd and after a 1:10 transition, I was back out barreling after Eric that was less than a minute ahead of me. It was go time! 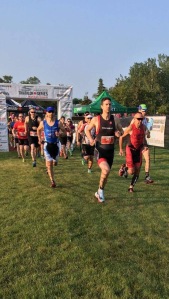 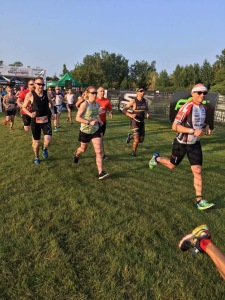 I noticed a slight tail wind on the first out portion and took complete advantage of it, passing about 50 athletes, 10 of which were duathletes, in the first 5 km stretch. As I hit the first turnaround fellow BLADE athlete Kevin Pogacar came by me with BLADE athlete Niels Dekker hot on his heels. Just watching them both play cat and mouse for the remainder of the hour was entertaining in itself. Well done guys! On the back portion we hit a decently strong cross/headwind which slowed my speed down, but I tucked in as aero as I could to conserve as much energy as possible, for the surge on the next lap. I hit the turnaround and put the hammer down again, passing another 5 athletes and held my position in 8th coming into T2. Another speedy 1:11 transition and I was back out onto the final run. 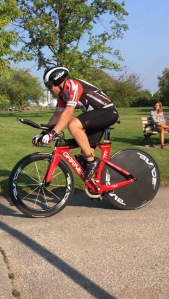 I had not been paying attention to the overall time, but felt like I was close to my goal. Thank you to Parichit Bagga for the extra motivation on those final two laps. I was losing steam fast but knew I had to hold all of the athletes off for just a little longer. Two athletes were able to blast passed me, but I had 750m to go and it was time to go for broke. I turned the final corner towards the finish and could hear someone stampeding behind me.. I yelled ” not a chance” which probably came out something more similar to “NAW ANTS” lol, as I pulled every ounce of being that I had left in me to hold them off, sprinting through the finish line to the hilarious announcement of Steve Fleck, pointing out the battle that was underway between two athletes who weren’t even in the same race.. haha. Better safe than sorry!

I spent the next couple of hours with each one of my supporters (Skechers Performance, F2C Nutrition and Multisport Canada, educating and assisting athletes with questions about each brands products, how they have helped me in my own aspirations and was able to listen to athletes stories and comments on how their own race went and the goals they were able to achieve. After the awards and pictures we headed back to the docks and had another relaxing car ferry trip back to mainland, with Daryl and Dianne Flacks. What a great day out there. Thank you to Multisport Canada and the entire team of volunteers for once again continuing to improve on an already great race experience, event after event.

I had done the unexpected, securing my first Duathlon win of the year in 30-34 age group, my second 2nd place podium finish in the 30-39 age group and finished 10th overall out of 61 athletes, with a new all time personal best Sprint Duathlon of 1:11:40, just Over 4 and a half minutes faster than last year, a new PB for the 5k and the 4th fastest bike split. How the heck did I do that? Well there is only one change I’ve made this year regarding my nutrition and even without the training hours I’d prefer, I am stronger. I’ll touch on all of the specific changes in my article later this week and what I think made the difference. 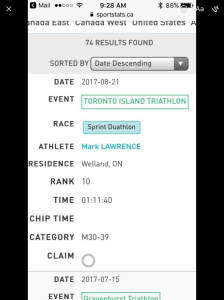 Next up is the Multisport Canada Wasaga Beach Triathlon/Duathlon this Saturday (my favourite race of the season). You can sign up at http://www.multisportcanada.com

Thanks for the visit!

Past Reports And Articles